That’s what I’d yell if I was a police officer chasing a suspect. And apparently, I’d be wrong. 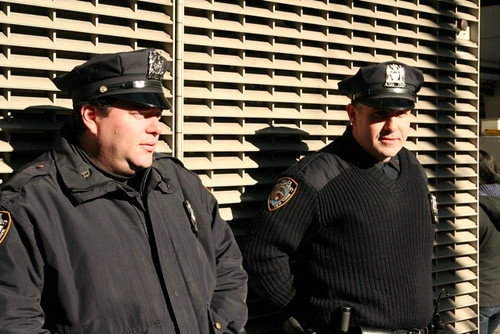 A buddy was watching a crime drama a while ago. I came in late. As I settled on the couch, a police officer was chasing a suspect.

“This story is set in New York. NYPD is New York Police Department. Everyone knows that.”

“Really?” I asked. “If I was visiting New York, and some nut with a gun was chasing me screaming out alphabet soup. I’d run faster.”

Of course, screaming out the acronym NYPD is ludicrous. If I was in Chicago, would police officers scream, “Stop! CPD!”? And if the Ontario Provincial Police yelled, “Stop! OPP!” — suspects would probably break out in laughter.

It doesn’t take any longer to say “New York” than it does “NY”. Same number of syllables. So it’s not a matter of speaking an acronym for speed. And it’s not a department that’s chasing a bad guy — it’s a solitary officer. Even weirder — why say the name of the city at all? Isn’t that redundant? After all, the suspect probably knows what city he’s in!

I asked my crime-show loving friend all of these questions. He seemed annoyed.

“Because it’s TV. I’m sure they say, “Stop, Police” in real life. Now can we please watch the show?”

I stopped talking, but I kept thinking about it. In real life, people can get a little acronym happy. The police officer became so accustomed to interdepartmental and collegial jargon — he forgot that anyone outside his circle wouldn’t know what the heck he’s yelling about.

It’s not just television show detectives that have acronym issues. As a consultant who gets brought into larger organizations, one of my first tasks is usually to crack the acronym and jargon code that insiders use among each other. This can actually be kind of fun — like a puzzle. Or learning a new tribal language. It also helps keep my wits sharp for when adolescents and young people start talking in Instant Messaging Lingo (IM, for short!) –“OMG! POS – TTYL.”

So when it comes to crafting presentations or communication pieces for an external audience, consider hiring a writer or editor — if for no other reason than to have an outside set of ears and eyes experience the communication piece. You won’t believe the alphabet soup I’ve often encountered in external marketing presentations. It often slips by, unnoticed to ears that have grown tone-deaf to the buzz of interdepartmental acronyms.

For a fun little exercise, open up any one of your recent corporate or organizational PowerPoint presentations. Do an acronym count — it’s quite likely that you’ll find at least one.

And before you think, “Yeah, but everyone knows THAT acronym…” please think about how little work it might take to change it. You can make yourself more clear by actually speaking the words — instead of chanting the letters that represent the words.

This one simple act may keep your suspects — er, prospects — from running away!