I hope you never experience a crisis. But when you do, be prepared. 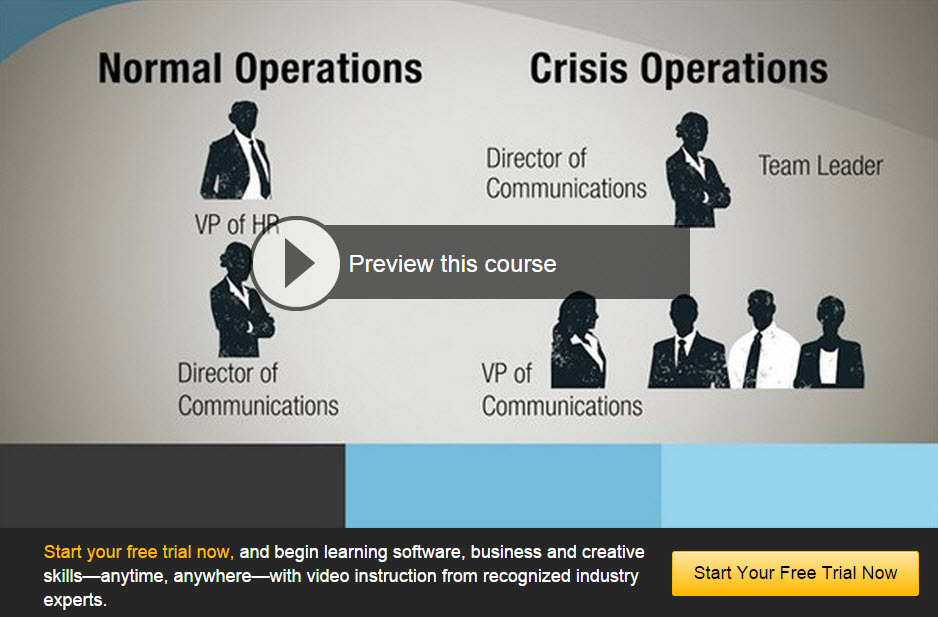 I felt inspired to write this course because I’ve watched people struggle to figure out how to communicate when something unexpected and unpleasant strikes their organization. My aim is to reduce the panic that people can feel when something goes wrong.

When you take a little time to prepare, you’re on your way to learning how to communicate calmly, quickly, and confidently. My hope is that this course will help you drill on the fundamentals in a way that engages and inspires your crisis communication response teams.

You can take this course alone, or use it as a team building or class exercise. Watch the videos, download the exercise files, and complete each step-by-step activity. If you’re a PR or communication professor interested in the flipped classroom approach, try reviewing this course to see if it will work as part of your lesson plan.

And even if don’t think you’re involved in crisis communication, think again. I recently published You Might Be in Crisis Communication — And Not Know It.  At some point, everyone experiences a crisis.

It helps to think through how you’ll respond; not just as an individual, but as an organization. Take some time to prepare. I hope you can prevent a bad situation from becoming worse — and that you’ll feel prepared to respond with confidence. 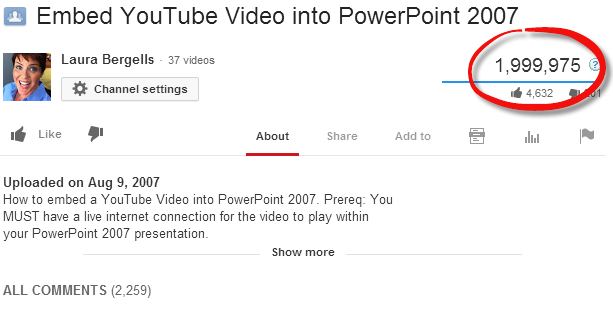 Back in 2007, I quickly tossed up a YouTube instructional video. It took me about a half hour to make the 4:46 minute video.

Today, the video will reach its 2 millionth view.

But it’s not a viral video. It’s not hip or trendy. It didn’t get a big spike in viewership and then go away. It was meant to be helpful, and at least a few hundred people a day still watch it.

And I still receive a ‘thank you’ for posting it almost every day. Those thank-yous have often been real day brighteners for me.

Thanks for watching. And thanks to the 4K+ who “liked” it. Thanks to the thousands of friendly commenters — I understand that’s a rarity in YouTube comment land!

And thanks to new clients who hired me — just because they “liked my style” or “liked my voice” on the video! Who knew?

It’s a different world than it was in 2007. What tiny little thing will you do to today that might quietly ripple into 2020 and beyond?

Owing to global weirding, those who can are making plans to telecommute today. If you’re a writer, teacher, or communicator: you might have access to tools that allow you to do your jobs remotely. In a pinch, remote tools can often allow ‘the show to go on’.

I remember speaking at an out-of-state conference a few years ago: one of the conference organizers approached me and asked if I would mind switching my allotted speaking time to another time slot. It seemed that there was a travel glitch: another out-of-state speaker couldn’t arrive to speak on time.

Of course I agreed to switch time slots. One look at the anxiety on the organizer’s face told me I needed to do whatever I could to make her life easier. I watched as she and her team scrambled with the hotel staff to set up a Skype connection to a large screen data display.

The scheduled speaker ended up speaking remotely via Skype. It was a smart and successful adaptation to a trying situation.

Similarly, a number of weather-related and travel-related emergencies have cropped up in my life over the past year. While I agree that face-to-face client meetings are necessary — it’s also time to learn to smoothly integrate telecommuting into your work schedule if it’s possible.

Before scheduling a face-to-face meeting, I often find myself asking, “Is this something we can do over phone? Or Skype? Or Google Hangouts?”

Clients are usually pretty delighted to at least give it a try. In a pinch, remote meetings and classes can work very well — especially when you have practice using them in non-crisis situations!

Why not try scheduling a few meetings remotely when you don’t absolutely have to? Make them more matter-of-fact? Personally, I find remote meetings to be huge time-savers: the tendency to linger or sidetrack seems to diminish online. And the costs associated with travelling (time and energy) also disappear.

How can we more smoothly integrate telecommuting policies into our day-to-day business life? And could it be that we’ve arrived at a time and place in our evolution where learning how to effectively communicate on-camera is a key business skill?

Watch the first televised presidential debate on YouTube. Kennedy and Nixon go head-to-head in 1960. Today, this debate is often discussed as an example of how much your personal appearance matters when it comes to an important televised presentation. 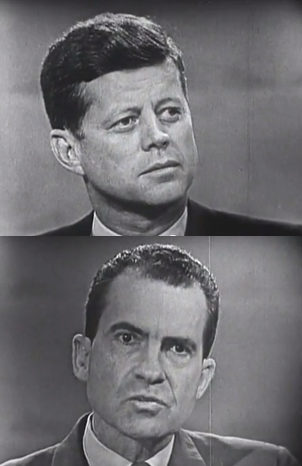 By contrast, Nixon didn’t seem to bother much with his appearance. He wore a rumpled suit. Under the bright lights of the TV cameras, every wrinkle in this light-colored suit became deeply exaggerated. Nixon also pooh-poohed makeup. At certain points in the video, you can see sweat beading on Nixon’s face.

And, oh dear…I wonder if Nixon even shaved. Is that razor stubble I see?

For the TV generation — appearance matters.

Let’s fast forward 35 years from 1960. In 1995, I participated in my first video conference for business. In the mid-90’s, video conferencing was very expensive, but it allowed us to significantly trim travel costs with our established customers.

Today, I still participate in business video conferences. Inexpensive and easy-to-use tools like Skype and Google Hangouts help keep travel and productivity costs in check. I also participate in webinars and perform in online videos on YouTube and lynda.com video tutorials.

But if there’s one tip I’d like to share with you about appearing in any web video for business purposes today, it’s this:

You may think, “Oh, but I’m an engineer/programmer/technician. The way I look in my web video conference doesn’t matter. People really care more about my content. They won’t judge me on the way I look…”

Or if you’re a salesperson and you think, “Hey, my customers and prospects are smart. They understand that I’m not really greenish-grey. They know that fluorescent lighting just makes me look that way on camera…”

Or if you’re a designer and you find yourself saying, “Honestly, looks don’t matter…”

(Wait…you’re a designer and you think the way stuff looks on screen doesn’t matter???)

Your audience is the TV generation. They have expectations for how people look and perform on screen. If you fall short, they’re probably not going to tell you to your face.

But will they secretly judge you? Sure. They can’t help it.

There’s a heck of a lot of work that goes into looking and sounding acceptable on camera! Lighting. Hair. Makeup. Wardrobe. Camera angles. Props. Set design. And much, much more….

In person, you may look like a polished professional. And even if you’re slightly “off” — a few small raindrop stains on your suit, a bit of a 5 o’clock shadow, faded post-coffee lipstick – we regularly overlook these minor flaws in people we work with in person.

But on camera? With people you have yet to meet?

As the saying goes, you don’t get a second chance to make a first impression!

If you’re going to participate in a video conference for business, I strongly suggest that you try conferencing with people who already know you. Meet people in person first – they’ll be far more likely to forgive any technical shortcomings with regard to your video appearance. If they already like you in person, they’ll actually be glad to see you on camera.

However, if you’re looking to make a positive first impression with customers by offering an online video experience — invest in the important facets of video production. Take some time to polish your personal appearance and presentation techniques.

You can ask Google almost anything. But at the moment, you have to use your words.

Today, I can’t show Google a photo of an unknown thing and ask, “What is this thing?”

Before the popularity of online social search, I used my favorite social network: face-to-face. I’d ask friends and colleagues, “What is this?” In the case of the unknown object seen in the YouTube video posted below, it took about 5 years of lighthearted cocktail party conversations before I found a correct answer.

Today, I’m posting the object online for the first time. I’m going to guess that it’s going to take a considerably shorter amount of time than 5 years for someone to see this and correctly identify the object.

My three questions to you are:

1) how long before we’re able to show Google a photo of an object and have Google correctly identify the object?

2) under what other circumstances might you use social search to supplement Google search?